So, this is the bit about the training. Trying to prepare to swim around 70km by practicing in a gravel pit a little over 250 meters long. Yes, 272 lengths is like actually swimming the real Lake Geneva. A daunting calculation.

With any training, staying committed is tough though. At least when we’re skiing you get the views, the fun of exploring and the feeling of knowing what you’re working on, trying to make changes, to feel better. This was pure grind – bringing one arm at a time over and breathing every third stroke. How do you stop yourself just packing it in and finding excuses?

Maddie and I have different lives so our preparations were a little different. Mine began after the end of the winter season. Once skiing had finished, I felt ready to focus on the swim.

A trip to Lake Geneva three or four times a week wasn’t exactly a convenient plan for either of us, so we improvised and used the man-made lake in Le Chable which became training HQ.

This is the Gouille (pronounced “goo-ey”). Often murky, regularly populated with anglers who didn’t like people swimming past their lines, and now a horribly, horribly familiar place.

We would get down there as often as we could, swimming length after length of the former gravel pit and train as long as real life, jobs and children allowed.

Initially we were committed and driven.

Every hour in the Gouille became tougher though – not just the swimming and the monotony, but it meant an hour away from my girls, away from my husband, an hour where I couldn’t be contributing to the family exchequer and an hour that would make me even more tired for all of those things afterwards.

It seemed selfish, and self-indulgent. That doubt and guilt made training hard. Really hard.

But I knew that this challenge would take sacrifices – training for anything big fundamentally does.

And as the saying goes “Nothing great is ever easy”.

Guy and I talked about it a lot and we coined another phrase, “the balance of imbalance”. The idea you have to get used to your relationship being lop-sided at times. I knew what I was doing was only about me, and that was the point. For this challenge to succeed I was going to have to be prepared to be as ‘selfish’ as I could. And as Guy pointed out, that’s actually ok.

In life it really is ok to focus on yourself, on your goals and on doing things purely for yourself – in fact it’s essential from time to time.

I say that not as a big confession, but actually as a piece of advice. If I’ve learned one thing from this swim – and the challenges before it – it is that the value in having that time to yourself actually means you have even more energy and motivation to throw at the other things in your life afterwards.

OK, lecture over. But you know what I mean…

Maddie and I began to talk about options as summer advanced.The goal was to be fair, to each swim for the same amount of time. So we talked about pace and duration. We both preferred longer stints, grit your teeth and get through them swims with time to eat and rest in between but we wanted to make sure that we were in there for (near as damn it) the same time each. 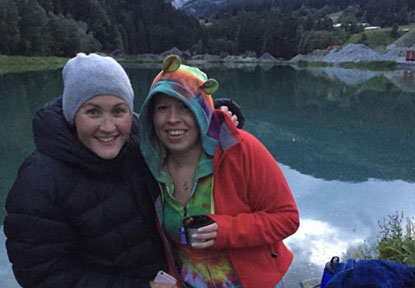 Initially anything other than the full swim seemed a betrayal of the idea, but the training to do all 70 odd km became a target that would require training and time we simply couldn’t commit to. So, we chose the relay option – quickly realising it was anything but the easy option.

We’d been doing daytime swims of a few hours, (Maddie more regularly than me) but if we could take the monotony of going up and down the Gouillie for that amount of time surely we were psychologically and physically nearing readiness? Plus the water at dawn would probably be colder than it would come October, which would be a great test of our endurance.

A cold snap, heavy rain and snow up the mountain the night before in a large pond filled with melt water didn’t help our nerves. It would be cold. But I’m a ski instructor – I’d just done sixth months of ice and snow and cold. Surely I’d be ok?

With a degree of trepidation we set off at dawn into the icy water. Our supporters ran shifts cheering us on and making sure we ate. But it became clear after the first few hours that Maddie was dealing with the cold better than me. I’d swum in colder conditions before, I’d swum for longer, but something started to go inexorably wrong.

Catie, our amazing cheerleader and psychologist and coach and medic, knew something was up when I came into the shore and couldn’t string a sentence together. My mind was as muddled as my words and hypothermia was clearly kicking in. Shaking and turning a bit blue I hobbled out of the water up the stony bank. It’s a gravel pit. A beach would be going some.

But after sitting for a while with hot tea, two down jackets and a car that had the heating on full, I slowly came back to normal. And I also realised Maddie was still ploughing up and down. Which made me proud and embarrassed and stressed all at the same time. It also meant I needed too get back in and get to the end of the first session. So I climbed out of Catie’s warm, safe, dry, cosy car and got back in the water. It was still bone-chillingly cold.

After the rest of the session, I had a similar experience struggling with the cold in the second swim session. Again I had to get out and was looking a bit blue. Again I got back in. Again Maddie powered through. And now a doubt started emerging – what if I can do the swimming but I can’t do the cold? I was heavier when I swam the Channel and also much more seasoned to the brutal conditions. Had I lost it? Whatever it was, that doubt lurked in every training session, and every waking moment.

Summer wore on, training swims came and went, we had trips to Lake Geneva where we knocked out three or four hour sessions and it became clear that a four hour relay would work and our logistics team (Guy with a notepad and a calculator) pointed out if we did three sessions of four hours each we should be in Geneva in about 24 hours – assuming our speed through the water was the same in the Lake as it was in the Gouillie.

With hindsight, a calculation that needed greater scrutiny. But more of that later.

Then during one of a number of chats with the Association they mentioned a slot had become available. Instead of October 3rd, we could move it forward by a month. My heart soared and I thought about warm summer water, the sun still beating down and no storms or rain or wind or, well, no real autumn.

Then I realised that took away weeks of essential training time.

The dilemma was clear: go early and train less or go later and risk the weather stopping the attempt before we’d even started. Maddie and I needed a team chat. In our funny symbiotic relationship we needed to work out if we the swimming ‘thing’ that was Maddie-and-Sophie could be ready so much earlier.

We’d both been away and training had admittedly faltered. When we were both back in the same place at the same time and able to train together would be less than 3 weeks before the new swim date. Could we really cram in all the extra training, cram all the lost hours back in, and could we fit real life around all this?

We decided we didn’t have a choice. The chance of warmer weather was too good for either of us to turn down. We had to make it work. We simply had to.

And by now the idea of just getting it finished started to feel more appealing than anything. Like a big, horrible exam hanging over you, #swimlakegeneva would be as amazing for simply being finished as it would be for the success or failure that went with it.

It seems sad to say it, but by now I just wanted it over. We chose September. READ OUR TRIPADVISOR REVIEWS AND RATINGS

We're very proud to have loads of great reviews on TripAdvisor from our clients. Have a look and see what other people say about us...