After training as much as we could, being as ‘selfish’ as we could (if you read the previous blog you’ll know what I mean…) and after simply running out of time, the big day arrived. Monday 12th September.

There was no hiding, no delaying and no escape. We were in a car with Graham (our entire and amazing support crew for the swim) on our way to Villeneuve in the pre-dawn chill.

Maddie was going to start from the shore. Meanwhile I would watch, video and try to sleep on the (rather impressive) boat we had for the attempt. The benefit of going first is that you don’t have time too think to much. Of course you have to push off from the ground knowing that unimaginable effort will have to be exerted before you touch land again…

But by going second I had far too much time to think. And worry.

Our crew was essentially Jacque the boat’s captain (a very nice man), his wife, a lady from the Lake Geneva Swimming Association (who would check we were within the rules and sometimes inadvertently stress us out), and Graham who gave us everything for as long as it took to get Maddie and I to Geneva.

It’s a pretty big ask to persuade someone to get on a boat for over 24 hours without sleep just to watch you swim. He was to be everything from motivator, to logistics manager and blogger. We cannot thank him and Catie enough for there support throughout the saga of the swim.

But Maddie set off and I knew in 4 hours we would swap. So I tried to sleep.

The first changeover wasn’t the hardest, of course getting in the water and facing four hours solid swimming is tough, but I was fresh, rested and I know I can swim that long. The second and third shift I knew would be tougher.

Maddie’s swim had been great: fast, regular and solid. But now it was my turn. I knew from training Maddie was faster than me but I knew I could keep going too. So I set off.

Graham broke the session into parts so every 45 minutes or hour-and-a-half we would get food or a drink passed to us on the end of a stick. It kept us going and broke up the enormity of the task. It’s called ‘chunking’. Ask your ski instructor about it.

We couldn’t touch the boat, or another person, and one of us had to be in the water at all times. Apart from that, we just had to swim…

So Maddie swam from 9am until 1pm. I swam from 1pm until 5pm. The sun shone and everything went well. Spirits were high. Water was calm and apart from a few strange icy currents that must have swept down from mountain tributaries on the French side, we were on target.

But as Maddie swam from 5pm through to 9pm, darkness fell. And swimming in the pitch black is as intimidating as it gets. I watched her dark shape cut through the black water with a glow-stick bizarrely tucked into her swimming cap. And at 9pm I had to get back in and swim until 1am. It was like slipping into a very dark, oily abyss.

Graham reduced the gap between feeds and drinks – simply so we had smaller markers to chip off. Swim for an hour: drink. Another 45 minutes: food. Repeat.

I could see the lights of the villages along the French coast, they seemed to stay very still and progress got slower. Perhaps dealing with the pitch black slowed us both. The wind getting up and the water getting choppier definitely had an impact.

Now, out of my share of swimming nearly half of it was in the pitch black. When you consider that well over 50% of this kind of swim is mental, that’s a lot of black to cope with. A lot of dark. A lot of pressure.

But I knew all that going in to this. So stay strong, dig deep, mind over matter. It’s not about how fast you get there, it’s about the climb, the journey. So keep going. It’s hard? Then find a way to break it up and time just passes. You keep going. I’d rehearsed these lines. Now I really needed to believe them.

We both swam for longer than we had planned but we just had to accept it, breathe and keep going. It really is that simple – we had to accept that it would hurt but understand that we wanted to keep going, and although there were things that we didn’t like about it, this was our choice.

Dawn broke. So did our hearts.

So session two passed for both of us. Not nice but we did it. Then session three – and that was when it was supposed to end.

But during Maddie’s third swim it became painfully clear that three sessions wouldn’t be enough. Not by a long. long way.

Our speed through the water was simply slower than we had calculated. We were swimming how we normally swam, with a little drop in speed, but we’d just got the sums wrong.

Graham had to break the news and it was tough news to hear. We had our sights set on three of those miserable four hour sessions, then we’d get out of the water. Now it was all different. But we both responded (after initial dread and fear and panic) by saying “it doesn’t matter, we will do this. Whatever it takes, we will get there.”

So our fourth sessions began. For me that last swim, when the fountain of Geneva was in sight, felt like FOREVER away. I knew I was in for about a 2 hour swim, but I told myself, ‘aim for 3 and it will feel better.’

After all, who cares about time now – we’ve got this. I’m tired, tired in every single way a person can feel tired, but we’ve got this. No sneaky tides, no bad weather, just keep plugging away. Keep the faith. Just keep swimming.

That said we also hadn’t planned to swim for so long – so we hadn’t brought enough food. Yes, that is a problem. But we saw the power of social media at it’s best and Graham’s plea for help saw a million replies and offers followed by a speedboat containing Michelle and a few bags of food to keep the team fuelled up. honestly – that happened. Groceries delivered via Facebook and a speedboat…

Now we were getting close. I could see the people on the beach, I could see the leaves on the trees but I wasn’t there yet. Not yet. I wouldn’t let myself believe that it was truly complete – until I actually hit my head on the barriers that cordoned off the swimming area. Only then did I know it was almost over. It was actually nearly over.

Maddie was right behind me, she’d got back in the water as we closed in on Geneva so we could reach the beach together. As we stumbled out of the water people were cheering, my feet felt the pebbles beneath them and I cried. I kissed my husband and I cried. I hugged Maddie and I cried. Tears of elation and joy and relief and achievement.

This was a challenge, an uber-challenge if you will, but really it’s not so different from any challenge that seems too big, like skiing. How do you get to where you want to be? Chunk it. Break it into manageable chunks. Know your goal, know where you want to be. Visualise it. Dream of it. Want it. Then work out how you’re going to get there.

You have to find time, make time, talk about it, cry about it, laugh about it, ask for help, want to be better. You have to be prepared to feel bad about it sometimes. Review. Reflect. Be selfish. Be proud. Work. Hard. Believe that it’s possible.

Because if you want something enough – want anything enough – you will find a way to make it work. It will almost never be exactly as you thought it would be, as amazing or glamorous, but a few things are guaranteed: working towards goals is the thing in life that makes us tick, that gives us drive.

Changing things about ourselves is always possible.

And even if it’s not what you expected, it is worth it. 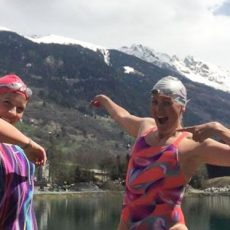